Robby Harris has a big problem on his hands: the executive director of special processes at Steelville Manufacturing in Missouri is often having to turn away work at their facility, which makes and then coats over 8,500 discrete parts a year, most of which are in groups of 32 pieces or less. 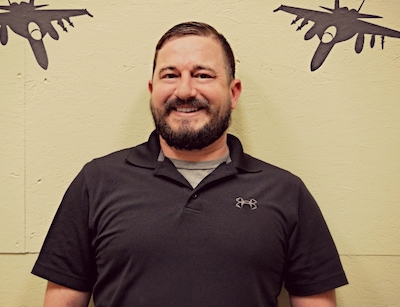 “We are having trouble keeping customers at bay,” says Harris. “There are a lot of problems with processors these days, and everyone is wanting us to do their work.”

Granted, it’s a problem many manufacturers and coaters would love to have, but for the people running Steelville — located in the town of Steelville about 90 minutes southwest of St. Louis — they won’t sacrifice quality for a few more bucks.

“We want to under-commit and over-perform, so we are very careful about the workload that we take on,” Dennis Bell says.

But help is on the way for Steelville’s finishing and coating department: a new 15’ x 20’ paint booth has been constructed by Fluid Air Inc- of St. Louis, Missouri, as well as a 10’ x 15’ mix room, and a 14’ x16’ curing oven. They are also increasing the size of their existing paint booth, and are in the process of adding a new fully-automated 8-foot tank line which should be complete by December 2020, built by Corrotec Inc. out of Ohio.

Parts for Aerospace and Tier-I

Suffice to say, Harris and his team have a plan, which is crucial since 80% of the parts they make and coat goes directly to aerospace OEMs or their Tier-I suppliers. In fact, it was Harris who helped build the plan for the coating facility back in 2013 when he joined the company when it decided to build its own coating operation, among other things.

Steelville Manufacturing was founded in 1959, and began its life as Erma’s Firearms Manufacturing Co. Paul Bell, who held a 25% share in the company, bought the entire assets in 1979, with one of the reasons being that he wanted to provide good jobs for the people in the community, which numbers 1,639 people.

Shortly after, the company began machining parts for McDonnell Douglas (now Boeing), and Steelville Manufacturing became a top supplier for machined parts. Over the years, Dennis Bell — Paul’s son who started working in the company in 1974 at 19 and is now CEO — started to realize that there was a major risk involved that they could not control: sending parts outside of the company for heat treat, chemical processing, and paint. In 2014, Steelville started working towards bringing their processing dream into fruition, with Harris newly on board to set up the finishing and coating operations.

“At that point, there were three of us,” he says. “Over the next year we wrote internal procedures, purchased equipment, and I was also given the daunting task of writing the environmental permitting needed.”

Coating Their Own Parts Brings Control

They began painting their own parts in 2015 with eight full-time employees and a part-timer, and over the course of the next two years added heat treating and chemical processing capabilities, allowing them to control the quality of processing of their parts, including how long it took to complete them.

“It’s easier to promise customers due dates when you can control every aspect of a finished part all the way from the mill to the painting and assembly,” says Dennis Bell, who owns the company along with Bob Bell and John Bell.

“Presently, we are processing close to 90% of our machine shop parts in house with 35 employees in the finishing department,” Dennis says. “The companies on-time numbers are better than they have ever been, not to mention the millions of dollars that we have saved by doing it in house.”

Company-wide, Steelville employs nearly 230 employees with three shifts, including the 35 employees on the one processing shift.

For Harris, it’s all about quality. They just completed their most recent Nadcap audit with zero findings, a fact that excites Harris to no end. On top of that, their average scrap rate is around 0.5%.

“Our jobs completed on time is at 104%, which is possible by getting more jobs out on time that what we receive on time,” Harris says. “We're averaging around 90 jobs a day.”

Essential, they have claimed their stake as a one-stop-shop for many OEMs looking for a manufacturer and coater all in one. And they continue to look for opportunities to expand.

“Currently, colored anodize is No. 1 on our radar,” says Harris, who adds that the secret to Steelville’s success is being open-minded and willing to change.

“We’ve tried to think outside of the box and not repeat mistakes we had seen others make in the past,” he says. “Many processors stick with the “It’s been done this way for 40 years, so why change it?’ method. I prefer to always change it. We’re always looking to add a competitive edge.”

That includes creating a good culture and working together as a team, which the owners feel have been another huge factor in their success.

“We try to pass down our knowledge and empower people to make decisions,” Harris says. “That has led to a very effective and confident staff.”

“It also helps that we are a one-stop-shop. There are not a lot of companies that can machine parts, heat treat them, chemical process and paint, assemble, and silkscreen all in the same place. We’re able to control the manufacturing process from start to finish,” Dennis Bell says.

Harris says his happiest day at Steelville was when they passed their first Nadcap audit with only three findings.

“People in the processing industry had cautioned the owners for years that they would not be successful in processing,” he says. “My happiest moment would have to be that day that we proved them all wrong.”

Harris and his team feel good about the growth of the company, especially with a talented team and a great set of owners and managers.

“It sounds cliché for an aerospace company, but I feel like the sky is the limit,” he says. “We have a pretty good strategic plan in place for the future. To simplify our plan: we set goals, then we achieve them. We refuse to fail.”

The Company - As technology continues to advance, Plural Component equipment is becoming a valuable way that factories can save money by conserving resources. Because plural component proportioners mix materials directly prior to application and require very little solvent, they significantly reduce build up of wasted materials. This means that expensive materials and solvents can be used for their intended purpose rather than incinerated. Another big advantage of Plural Components is the easy clean up, which simply includes flushing out the system and shutting it down. In response to these positive offerings, finishing companies have become increasingly aware of plural component proportioners and are looking for the optimal system to fit their needs.

The Challenge - CG Power Systems, a worldwide supplier of high quality industrial and consumer products, was in the market to upgrade their older, traditional Graco ProMix system. With the 2K, CG Power Systems was experiencing high levels of waste. Mike Wunderle, Environmental Health and Safety Coordinator for CG Power Systems, reported, “We would generate and pay for the incineration of between four and five 55 gallon drums each month.” This large amount of waste was not only costing a considerable amount of money, but it was also pushing the company’s Small Quantity Generator Status into jeopardy. CG Power Systems was hoping to solve these problems by replacing the 2K with a more advanced system that would hopefully provide savings on waste, decrease VOC’s, and decrease flush times.

The Solution - CG Power Systems worked closely with FluidAir Products in St. Louis, Missouri to come up with the best solution. They decided to replace the old ProMix 2K with the new ProMix PD2K Proportioning System, which allowed them to reduce solvent and material waste by about 80%. The ProMix PD2K is designed to reduce waste by moving the mixing point closer to the gun. This design feature ensures that the material is mixed precisely before it is sprayed. For companies like CG Power Systems, this means lower disposal costs of VOC’s and less wasted paint. This is especially true when working with multiple color changes per day and short pot life materials. Another feature of the ProMix PD2K are the dosing pumps, which will stall under pressure and use 100% positive displacement technology to ensure accurate mix ratios and consistent performance.

The Results - The first aspect that CG Powers Systems noticed about the new PD2K was the quick flush times, which the painters enjoyed. As time went on, Wunderle kept detailed records of paint usage and noted that “the new controller and its activity download make reporting much simpler, significantly reducing my time spent interpreting the output and creating required reports.” Results indicated that since installing the PD2K in June 2015, CG Powers decreased their waste from four to five 55 gallon drums per month to only one 55 gallon drum every five weeks, which is over 80% less waste. Wunderle is pleased with these improvements and expects further waste reduction as the painters continue to master the system and its benefits. In addition, the company’s Small Quantity Generator Status has made a dramatic turnaround. Wunderle says, “We have reduced our paint and solvent use to a point where I am able to apply for conditionally exempt status for Hazardous Waste Reporting.” The other benefits noticed by CG Power Systems are that the PD2K is easy to learn, the color changer and cleanout process is simpler and quicker, and that Graco’s product training is supportive and reliable. Overall, the ProMix
PD2K allowed CG Power Systems to operate smoothly and effectively while generating less waste and saving money.

Top
item(s) in your cart